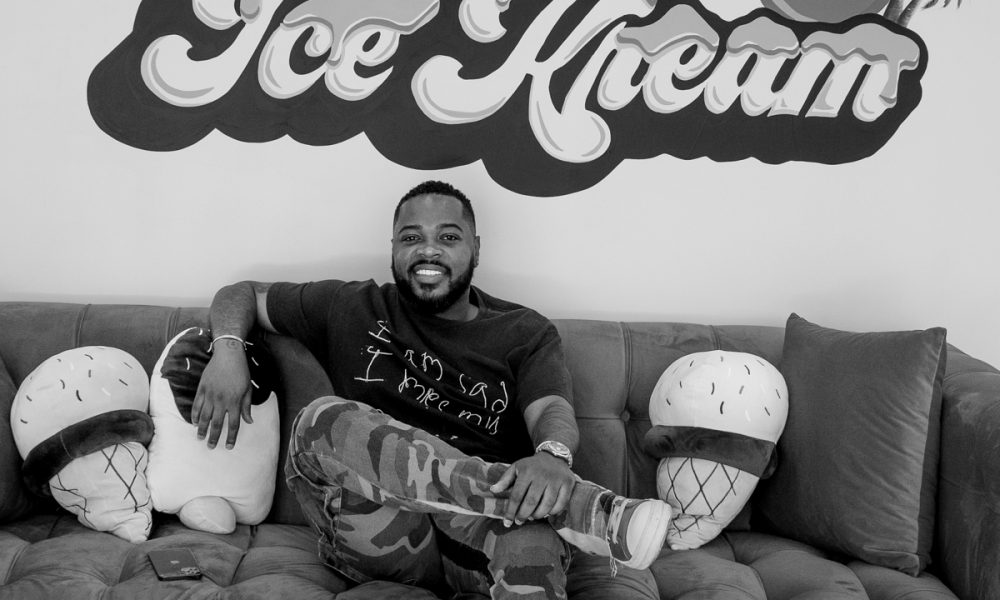 On June 18, Bay area weed collective Jokes Up opened its own dispensary in the San Fernando Valley of Los Angeles called “Jokes Up Ice Kream.” The brand also celebrated the year anniversary of its Jokes Up Plaza store in DTLA, which now features a mini Ice Kream dispensary inside.

Jokes Up was founded by Yung LB, who co-created the famous Runtz weed brand. Under Yung LB, Jokes Up has numerous brand-strain collaborators under its umbrella.

Ice Kream is owned by Scott Brown, who also owns the cannabis company Zeki. Ice Kream opened a little over a year ago on 4/20/2021, and the idea to team up with Jokes Up came about just a few months ago.

According to Pierre Porter, Ice Kream’s Events Director, Ice Kream opened a year ago, and the re-opening this June represented the launch of the co-branded Jokes Up Ice Kream dispensary. The collaboration happened, Porter said, when the Jokes Up team reached out to him with the idea.

“A friend of Pilar (Princess Cutt) hit me up like, hey, I think it’d be a dope idea if we come in and bring Runtz Jokes Up, that’d be big. I set up a meeting with the owner, and from there it was magic,” said Porter said.

The owner, Brown, has ties to legacy cannabis, according to Porter.

“Scott has been in weed for 25 years. He’s been in it forever. His family, his mom, his brothers. He knows what he’s doing. He’s a cool guy,” Porter said. “He’s very connected to the scene and what’s going on.”

Ice Kream opened on 4/20 of last year, after rebranding the former Urban Treez dispensary. With the reopening in June, the dispensary is now called Jokes Up Ice Kream.

The store offers something unique to the dispensary scene in LA.

“Ice Kream is about good vibes. You see when you come in the store, it’s very welcoming, it’s bright, it’s colorful, it’s fun. We ourselves are a family, we like that feel,” Porter said.

Locals are responding well to the brand — once they figure out that it’s not really an ice cream shop, that is.

“People love that logo,” Porter said. He says he was encouraged to make clothing merch by shoppers asking for it, and when he designed the clothes in collaboration with Marketing Director Kiana Fua, they sold immediately.

“It’s taking off. Everyone wants to buy it,” Porter said.

The shop will function as Jokes Up’s flagship store. For the launch, Jokes Up dropped 15 new strains.

“Jokes Up is poppin. Having them collaborate with us — we had the space they had the name — coming together really brings two different communities together and that works good for both parties,” Porter said.

For Porter, the progress that Ice Kream has made in the past year is all part of the plan. Having spent years in the entertainment industry doing events and promotions, Porter, an LA native, is in his own lane in the weed industry. For the Ice Kream brand, Porter will soon be dropping his own strain, specially selected and named by him.

The June 17th opening event drew dozens of members of the Jokes Up collective, which is based in the Bay area, down to sunny LA to celebrate being on the shelves of a licensed dispensary. In some cases, Jokes Up strain-brands were being sold on the licensed market for the first time.

The dispensary features the Jokes Up brand strains and collabs that have not until now been available in dispensaries in LA. Jokes Up strains include Trappacino, DNA, Lava, Kool Whip, Slime Pop, Kandy Lane, Dream, Kuya, Princess Cutt, Banditz, and Knock Out.

Other featured collabs include Honey Combs by Justin Combs who is Diddy’s son, Credit Champ by Mike the Credit Champ, Knock Out by rapper Jim Jones, Awful Lot of Cough Syrup by artist Desto Dubb, Avianne by Avianne the Jewler, Gross by rapper Chief Kief, Can’t Feel My Face by Juelz Santana, Candylane by PMB Rock, BMF by Big Meech, Nasuh by Nasuh, Payd by Jay Payd including a Payd collab with Kool Kiy, and Joey Diaz’s line of weed called Laughing Gas.

The Jokes Up Plaza in Downtown LA got a thorough makeover including a new Ice Kream dispensary kiosk inside. The Plaza bills itself as the Jokes Up Clothing Store, Car Wash, Benihibachi Restaurant, and Jokes Up Smoke Shop. LA Rapper Chad Watson performed at the event.